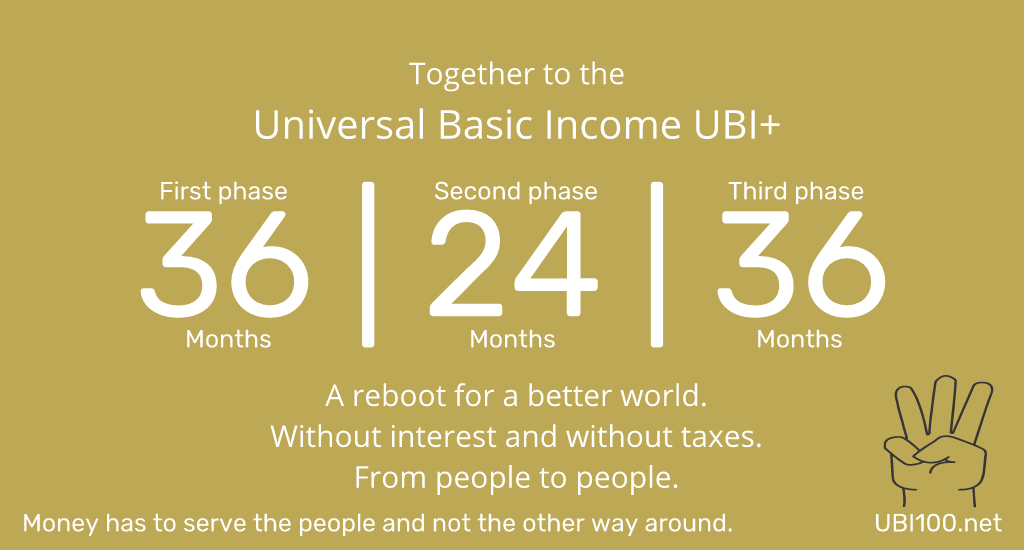 THE NEW GENERATION CONTRACT
THAT CONNECTS PEOPLE AND COUNTRIES.

WITH THE UBI+ PEACE, FREEDOM AND PROSPERITY CAN BE MADE POSSIBLE FOR ALL PEOPLE OF THIS WORLD.

As soon as social and financial security is guaranteed, the good in people can also come to light.

Based on the model – UBI+ – people from all over the world have set themselves the goal to introduce a humane UBI in all countries of the world.

CONCEPT OF THE MODEL “UBI+”

– INDIVIDUAL LEGAL CLAIM
Regardless of whether you live alone or with others, whether you are married or not.
– WITHOUT EXAMINATION OF NEEDINESS
Everyone has a right, regardless of income and wealth.
– UNCONDITIONALLY
Without consideration it is – like love – granted unconditionally or without any string attached.
– SECURING EXISTENCE AND PARTICIPATION
It ensures existence and full participation in social and cultural life.

– SOCIAL INSURANCE
It guarantees the best accident and health insurance for all people. Enhancing the freedom and dignity of individuals.
– CARE MONEY FOR SPECIAL NEEDS
The UBI is increases by 20% per care level.
– IMPENDERABLE
– VALUE GUARANTEED

– PAYOUT DEPARTMENT
The payment point can only ever be located in one country in order to avoid double payments – regardless of where you live. And that is where the country of origin of the citizen is decisive. In the case of dual citizenships, the place of birth is decisive.

Questions and answers on the unconditional basic income

FINANCING
The financing of an unconditional basic income is not important – because there is enough money. Money itself has no value and thanks to the reform of the monetary system, financing is no longer necessary in the second phase. For the first phase, we have prepared a cost estimate for Austria in cooperation with the Akademie Bewusstsein Grundeinkommen: Cost estimate for UBI Austria

In order to successfully introduce the idea of a humane unconditional basic income according to the model – UBI+ – also in your country, we now need your help.

Be part of the movement and say something about it! – or participate.

The UBI+ connects countries and people and can make peace, liberty and prosperity possible for all humans of this world.

3 phases that bring us to a worldwide UBI:

1) National UBI (first phase)
– Each country introduces its own individual UBI, which could be based on the criteria of the model “UBI+”.

2) Continental UBI* (second phase)
– From the moment that there is a national UBI in each country of a continent, the country with the highest rate is used to transfer this to all other countries, so that from now on a uniform rate applies to the entire continent.
The national banks transfer the UBI directly to the citizens.

3) Worldwide UBI (third phase)
– Once all countries in the world have at least one national UBI or are already within a continental UBI, a globally uniform UBI will be launched. All countries will then be raised to the highest UBI to enable equal conditions throughout the world – which would mean the beginning of a free and peaceful world for all people.
The National Banks transfer the UBI directly to the citizens.

* Start of the monetary system reform – whereby sufficient money will be available.

Register now and receive 3000 PR every month:
Give your support!
- Start Unconditional Basic Incomes (UBI) throughout the EU
- Launch of the unconditional basic income (UBI) in Austria

© Yes, everyone can use this model or change anything.
The first of its kind. Share it!